Choosing a van is the first tangible step to building your own home on wheels. Cue the weeks or months of craigslist ad stalking and used van dealership searching!

What factors were important to us?

Everything is basically sold for a premium in California, especially the Bay Area. So buying a vehicle here is more expensive, but it also retains more value if you resell in the same area. We could’ve flown to Kansas or somewhere to buy a Sprinter for cheaper and drive it back, but we didn’t have the time to do that.

I was searching for a van for about 3 months. And…it was disheartening to say the least. It was hard enough finding ones with a high top and 144″ wheelbase, but most had too many miles, or required major repairs. That, or the ads posted on websites were so outdated the van was long sold. My radius was mostly in California or Southern Oregon.

We inspected a few in-person, with the private sellers. However, I am glad we ultimately decided to buy through a dealership. They handle all the title transfer and DMV paperwork. Additionally, the dealership we used in LA (FamVans), helped put our minds at ease. They dropped the van off for a pre-purchase inspection (by a third party shop), and when some fixes were identified, the dealership fixed them without changing the total price (although they made a mistake we later had to pay for). After another check to confirm the fixes, we flew down to LA and completed the purchase.

What were our other options?

As beautiful as the Volkswagen bus is, it is just not practical, and too expensive. The only vans we seriously considered were:

A Dodge Sprinter is the same vehicle as a Mercedes Sprinter, just branded differently due to a manufacturing agreement between the two companies.

We would’ve probably chosen a Ford Transit if it were not for the price.

The thing about Promaster that really put me off was how badly reviewed it was. Tons of people seemed to have problems with it breaking down often, which would make repair expensive. In the end, we decided we would rather take the chance with expensive repairs, than frequent repairs.

Prior to purchasing, we were aware Mercedes repairs would be much more expensive to fix. It was listed as a major disadvantage for Sprinters, but we decided to take our chances, and fingers crossed we don’t run into problems even pricier to fix!

Overall, we’re happy with our choice, and our van (Bernie) has traveled 15,000 miles so far. Here’s to many more! 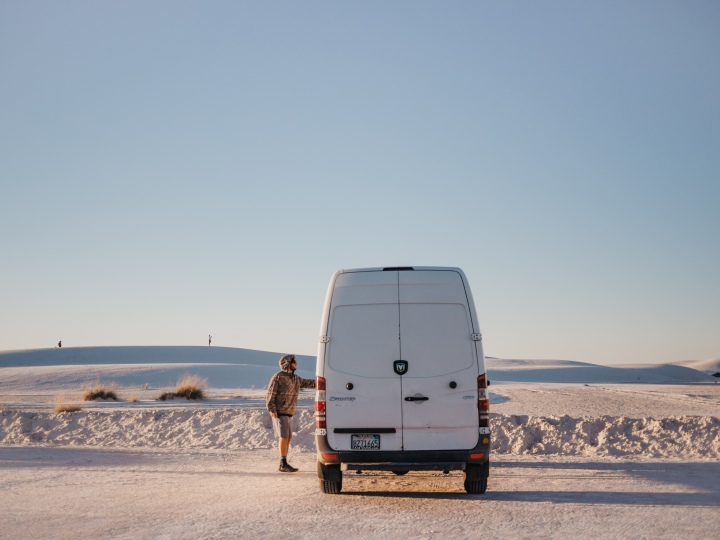